A forum for the bird lovers.

You are not connected. Please login or register

Still hanging in there

Still hanging in there

We had a real scare this weekend. We really thought we were going to lose our Freddy. He always breathes heavily, but it was more so than ever on Saturday. He was sleeping constantly, and when he breathed you could hear whistling and rattling. Plus he was sneezing all over me. I couldn't take him to the vet, because the stress of being handled would've killed him for sure. We truly expected to wake up the next morning and find that he had passed. I even told him that if he needed to leave us that it was okay, I'd understand. But, tough nut that he is, Sunday morning he was a little better, eating and sleeping and showing a little spunk. Today, he was MUCH better! He is just so unbelievably resilient for such a little guy. 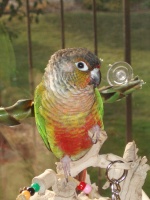 You should rename him 'the energizer bird'

Glad to hear he's still truckin' along. It's so hard to lose a family member, even if they are ancient (no offense, Freddy). That just means you've had longer to fall irrevocably in love.

I believe that can be arranged. 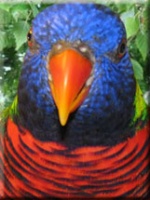 Oh poor Freddie, I know that labored breathing can be tough to see. I also know he's had an awesome life with you and you should be proud of yourself for doing it right. He's a good age for a cockatiel. I know how hard it is to let go, been there way too many times. It doesn't get any easier.
_________________
Carol &

Well, this morning after Dad fed them he forget to close Freddy's cage. He went out to feed the "livestock" in the back yard and when he came back in -- no Freddy. We found him halfway across the room, huddling under Callie's playgym in a state of shock. Obviously, he fell off the top of his cage again. No blood that I could see, but he's had a setback now. Noisy breathing again, sleeping -- you can tell he's in pain. I wonder how many ribs he's broken over the years? He won't be happy, but we can't let him come and go as he pleases anymore. It's tough getting old.

I have pictures up, btw.
Chris

We lost Freddy about an hour ago.

Thank you, Carol. Of all my friends, I know you truly understand. He really must've bruised or busted a rib when he fell because he was really breathing heavily after that. Mom and I both tried to take him out for a cuddle and he didn't want either one of us. But, I knew his time was short so I forced the issue, and he sat on my shoulder cuddling my cheek, wheezing and gasping like an old steam engine. His beak was open while he was breathing and I knew in my heart it was over. Mom came up behind the chair, leaned over, and gave him head scritchies while he struggled. I gave him to Mom while I called the vet. We're socked in with snow, but if they had a little oxygen tent for him Dad would've got me there even if he had to borrow a dog sled! While I was hanging up, Freddy slipped off of Mom's shoulder and face-planted into the sofa. I found him in the face-plant position gasping for breath. Mom tried to pick him up and he had a seizure. I scooped him up because I wanted him to die with me. He had another seizure then and passed away in my hands.

My mother's a soggy mess. I'm deeply saddened but not so soggy, basically because I knew it was coming. That doesn't make it any easier, but I'm comforted in knowing that he's not hurting anymore, and he's with Tiki and Barney. I'm really worried about Cricket, though. Cricket was so obsessed with Freddy, constantly watching and staring at him. He was looking into Freddy's cage all evening. When it finally hits him that Freddy's gone, I don't know what he's going to do.

He was in a frail state so falling didn't help but he probably fell because his organs were starting to shut down. When you first started this thread and noted labored breathing it made my heart hurt. More for you than Freddy. He's pain free now but your heart has a hole in it. Yes I know that pain way too well. All you can do is cherish the memories. He was a cutie and probably the best friend you ever had. Unconditional love can never be forgotten. I still think of Robby and sometimes I can feel him here...I know I'm crazy but I truly believe they live on forever in us.
_________________
Carol &

I believe it too, Carol. I feel all three of my little ones here with me.

Poor Cricket has been clinging to that side of his cage all day, staring at the empty cage as if willing Freddy to reappear. Part of me is actually glad that he crossed over because he really was failing and now I know he's not suffering. Mom's a sloppy mess, however. Yesterday was Dad's birthday, and I teased her about baking a chocolate snot cake for him since she was so weepy while mixing the ingredients. But, we're coping.
Carol

Awww your poor Mom I feel her pain. Please give her a hug from me.

Well, so much for worrying about Cricket. Two days after the fact, he's over it -- take me out, step up, play with me! Callie however, went into a two-week long funk. I didn't event think she saw Freddy as anything more than a decoration. Just goes to show that our birds are deeper than we realize!

Time will heal. That's what they say anyway. As time goes by I know that the good memories out weigh the bad so I'm thinking that's what that saying means. Hope you have a wonderful Christmas.
_________________
Carol &